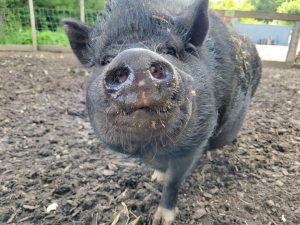 Many people are surprised to learn that pigs are very social and that they maintain a strict hierarchy within their herds. In fact, every activity of a pig’s daily life is governed by their place in the hierarchy. By simply observing a herd of pigs, it wouldn’t take long to figure out who’s Top Pig. The head pig can be seen eating first, choosing the best bed and claiming the perfect sunspot to rest – even if another pig happens to be there at the time. This is accomplished through forceful snout nudging.

This hierarchy works well to protect the weaker pigs in the herd but it can sometimes cause problems when two or more pigs vie for the top spot. There can only be one Top Pig and it can get dramatic while they sort it out. It is important to understand that this is all normal pig behaviour even though it might appear dangerous or aggressive to us.

Allow me to introduce myself

When pigs first meet it can be a tricky situation. They will immediately begin to size each other up- who is stronger, more dominant, more timid, or more shy. And we always have to closely supervise any initial face-to-face interaction. The hierarchy situation must be sorted out by the pigs themselves, so we try to make it as smooth a process as possible knowing that when they do meet, they will immediately try to determine the Top Pig and that is usually done through a fight. The “winner” is determined by being the pig that doesn’t eventually step away from the fight. The Top Pig will remain in place until they are challenged by another pig who feels confident that they can “win” the Top Pig position. Often this change in leadership occurs when the current Top Pig is injured or grows too old or weak to defend their position.

As caregivers, we do everything we can to allow for the pigs to sort out their hierarchy while preventing any injuries that may result from this process. That’s why it’s important that we introduce our pigs to each other in a very slow and supervised manner, ideally over the course of a few weeks. One way to start, when possible, is with non-threatening introductions through fence lines, for example, before allowing in-person meetings. 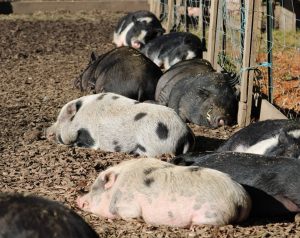 Being social animals, pigs don’t restrict their herds to just other pigs. They will include anyone living within their space such as humans and family pets. Since snout nudging is a way for the Top Pig to communicate their position in the herd, it can be seen as aggressive to people who don’t understand herd behaviour. Also, pig snouts are strong. VERY strong. Even a slight nudge from a pig snout can be painful for a human or smaller animal. Often, this is the behaviour that results in pet pigs being rehomed or surrendered to a sanctuary.

As a human, managing the Top Pig in the hierarchy is easy if you understand pig behaviour. You simply assume the top position in the herd. How? You do something called “move a pig”. This is where when you walk gently, but firmly, towards the pig (or through the herd) and continue until they move out of your way. It takes determination but this action demonstrates to the Top Pig that YOU are actually in charge of this herd, even if it’s just a temporary changing of the guard. And, because pigs reinforce their status in the hierarchy all the time, humans who interact with pigs play “move the pig” a whole lot!

While this position is not a permanent one, currently Merlin is the Top Pig at Carroll’s Animal Sanctuary and Rescue.

Get your Holiday Gifts for the Animals today!

Support the animals this Holiday Season & give an amazing gift to your loved ones!

We  send out a personalized certificate for you to gift at the Holidays! 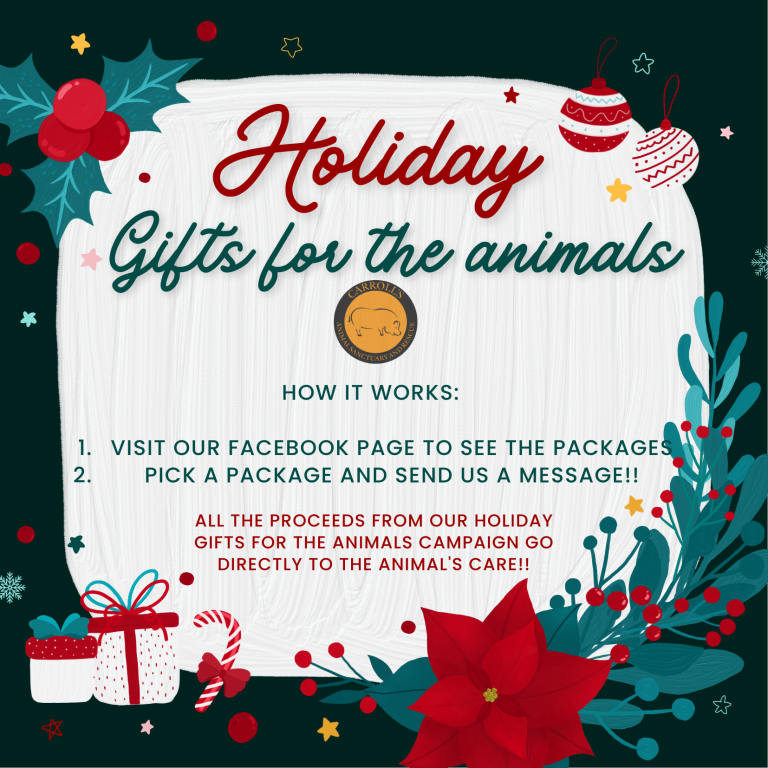